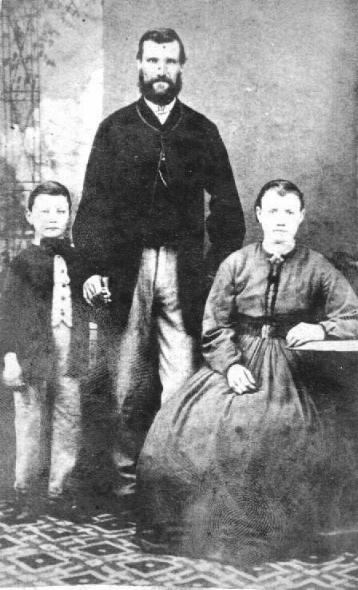 Elizabeth Woolcock (20 April 1848 – 30 December 1873) was born Elizabeth Lillian Oliver in Burra and was hanged in Adelaide Gaol for the murder of her husband Thomas Woolcock by mercury poisoning. She remains the only woman ever executed in South Australia and is buried between the outer and inner prison walls. It has been argued that she may have been a victim of domestic violence and suffered from battered spouse syndrome.

In 1865 after receiving news that her mother was alive and looking for her, Elizabeth travelled to Moonta and moved in with her mother and stepfather. To support herself she got work as a housekeeper, on weekends taught Sunday school and there is evidence she even managed to kick her addiction as, unlike the eastern states where they were freely available, opiates required a prescription in South Australia. In 1866 a relative of the family she worked for arrived from England and after moving into the household took over her job which led to Elizabeth’s dismissal.

Thomas Woolcock emigrated from Cornwall and settled in Moonta with his wife and two children in 1865. His wife and one son contracted a fever and died the following year, and with a young son also named Thomas, to care for he advertised for a live in housekeeper for which Elizabeth applied. Elizabeth’s stepfather disliked Woolcock and considered the live in arrangement scandalous, Woolcock, to avoid gossip married her in the cottage’s front parlour.

Woolcock turned out to be a heavy drinker, a bully and a wife-beater. Elizabeth attempted to leave him several times but failed and eventually attempted suicide by hanging herself in the stable but the rafter broke sparing her life. She became addicted again, this time to Morphine. The situation improved somewhat when Woolcock took in a boarder whose presence lessened the abuse she suffered but eventually the two men had a dispute and the boarder left. Not long after he left the family dog died after being poisoned and the boarder was suspected. Around this time Elizabeth ran out of Morphine and began suffering from severe withdrawal symptoms, the chemist refused to prescribe any more and she resorted to sending her stepson to pharmacies with notes and claiming she needed it to “get ink stains out”. Her desperation to acquire drugs became common knowledge in the community.

A month after the dog died, Woolcock became ill with stomach pains and nausea, Elizabeth called in three doctors over the following weeks who each diagnosed different illnesses and prescribed different medications. Dr Bull prescribed syrup and pills laced with a third of a grain of Mercury each (21 mg), for a sore throat but Woolcock became considerably worse and Elizabeth then called in Dr Dickie who diagnosed a gastric disorder and prescribed Rhubarb tablets and cream of tartar which had no effect. Finally Dr Herbert treated him for a sore throat with excessive salivation. Dr Herbert’s treatment worked and Woolcock was improving but two weeks later he decided Herbert’s treatment was too expensive and went back to Dr Dickie who resumed the treatment for a gastric problem. When his condition failed to improve Elizabeth suggested returning to Dr Bull but, according to neighbors and friends who were present and later testified at her trial, Woolcock replied: “I certainly don’t want Dr Bull again, as it was his medicine that made me bad in the first place”.

At 3 am on 4 September 1873, Thomas Woolcock died. Dr Dickie initially stated his patient had died from “pure exhaustion from excessive and prolonged vomiting and purging”. Woolcock’s cousin, Elizabeth Snell, suggested to the doctor that as everyone knew Woolcock’s wife had been getting “Morphia” she could have poisoned him with it and rumours of foul play began spreading. Dr Dickie ordered an inquest largely to quash the rumours as he still believed his original diagnosis was correct.

The inquest was opened in the front parlour of Woolcock’s cottage with 14 jurors. Dr Dickie testified on the drugs taken by the deceased and the chemist, Mr Opie, testified regarding Elizabeth’s attempts to get Morphine. Elizabeth also testified. An autopsy was ordered and performed in the cottage that night while Elizabeth waited outside.

The next day the inquest resumed at the Moonta courthouse where Dr Dickie described the state of the body and suggested that Mercury poisoning was a strong probability, Dr Herbert concurred. Dr Bull admitted prescribing pills with Mercury but insisted Woolcock only took one. Police told the inquest that they had found a Mercury rich powder used to treat the Woolcock’s dogs Ringworm. The jury decided that Woolcock was poisoned by his wife and Elizabeth was arrested.

Elizabeth pleaded not guilty and the trial in Adelaide was a sensation with crowds filling Gouger Street outside the Supreme Court. The Crown Solicitor argued that Elizabeth had poisoned the dog as an experiment, the ringworm powder was the means and that motive was an affair with the boarder. Defendants at this time were barred from testifying on their own behalf so Elizabeth was unable to answer the accusations. Following a three-day trial the jury, after deliberating for 20 minutes, found her guilty with a recommendation for mercy but she was sentenced to death.