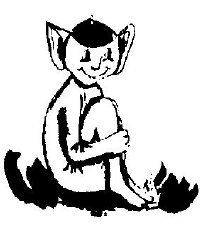 The Cornish Piskey was a figment of the imagination of the superstitious Cornish people in centuries past. According to Couch’s History of Polperro the piskey folk are about a span long (9 inches), clad in green and wearing straw hats or little green caps on their heads. Other observers have described them as being rarely seen in any other form than that of a wizened looking little old man.

Believing in the “spriggans” (little people) who could play tricks and cast spells, Cornish folk would respect their presence and be careful not to do anything to annoy or disturb them.

The Piskies – or Piskey as he is called, for he usually works alone – are as good a people as they are mischievous, helping the aged and infirm in their household tasks, threshing the corn on a moonlit night, plaiting the pony’s mane for stirrups and riding it wildly through the night.

The Piskey was a mischievous little creature, always laughing at someone or something and ready to play tricks on folk who walked home across a misty moor or along a lonely cliff path.

It is said the Piskey folk have the power of being seen, heard and felt and as long as you look after them they will look after you.